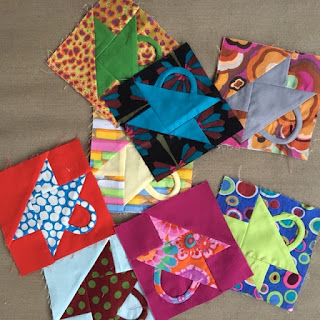 Eight basket handles appliquéd! I would have done more during Hubby's outpatient surgery, but they finished with him MUCH sooner than expected. Yay! He had a skin cancer removed from his forehead and now has almost 20 stitches. (They are neat and small - the doctor should take up quilting!)

He will be just fine, but is not allowed to swim or play golf for two weeks. Oh, that is torture for him!!! The doctor did say he could putt and chip, but I'm not letting him do that for a couple of days at least. In the meantime, we're watching lots of Netflix. We started two more shows: Doctor Foster and Doc Martin. Love them both!

This morning the repairman is coming to fix my exploding Samsung washing machine - after much thought, we decided to get the repair instead of the rebate. And when that is over, I have crafty plans!
When we were hiking a couple of days ago I picked up sticks and pine cones for a small project. Hubby is even excited about this idea and offered to help me put the pieces together today. Who knew Hubby would be interested in crafting????? I'll share a picture tomorrow!

(Did I really just say "whilst"???? These British TV shows are rubbing off on me!)

Have a great day!