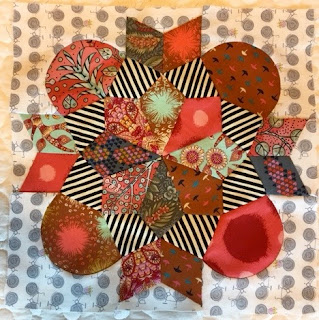 I finished another Farmer's Daughter block while watching football yesterday.  I adore the little gray bicycles in the background. The is the type of white print I'd like to collect to use in my Bonnie Hunter mystery quilt. 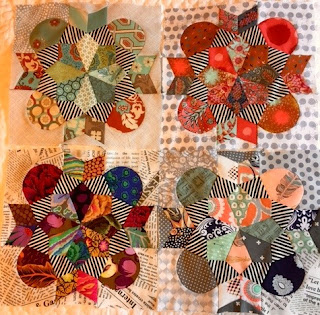 And here's a shot of four blocks side by side. I think it might be interesting to make some blocks using a darker gray background and make the fabric scraps lighter. I might just cut the next block pieces accordingly. FYI, the pattern calls for 25 of these blocks set on point...I'm getting there! I might do a 'quilt as you go' on the blocks.

This project has really brought Jen Kingwell to my attention. I love her designs! She has two new patterns out that I may look for in Houston. 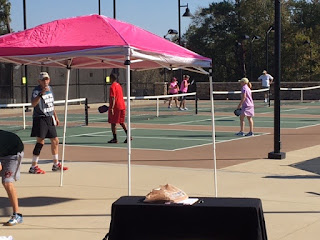 After swimming (60 laps!), showers, and breakfast (in that order) we took the golf cart over to the Pickle Ball courts. There was a tournament going on and we wanted to see some games being played first hand. There were players of all levels of age, body shape, ability, and fitness. After watching a bit, we decided we could do this. It's sort of a cross between tennis and badminton - much less active than tennis. Once my foot it totally better we're going to give it a try. For now we are studying up on the rules online. 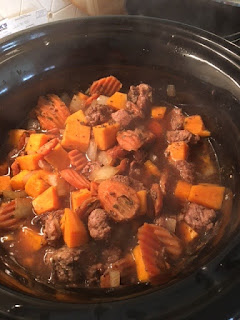 The stew I made was really good! I used sweet potatoes instead of white potatoes. Yum! I froze some of it for Hubby to eat while I'm in Houston with my friends. Today is bread making day! I've already cooked a batch of chicken and put it in the freezer for him. Yesterday I taught him to cook his own eggs for breakfast. He will not starve while I'm gone! (Though he needs another egg lesson this morning.)

Have a beautiful day!
Posted by Julia Wood at 6:09 AM