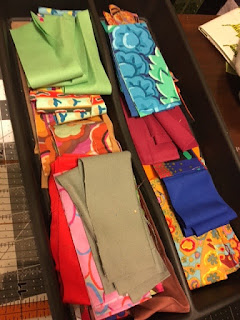 I've had the fabric for my UFO nine patches piled up in my sewing room. And I don't have room to have piles! So yesterday I decided to cut all the strips for the nine patches. Done. Then I could put all that fabric away and organize the strips in a little bin. So now I feel organized and ready to sew again! 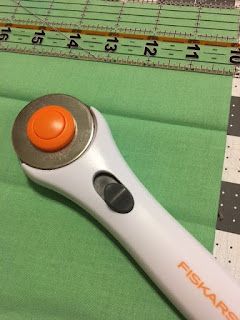 AND I finally put a new blade in my rotary cutter! Do you put off changing yours? I don't know why I waited so long - go change your blade NOW! 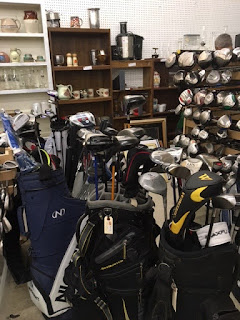 We did have a nice outing to the antique mall. Yes, there is a golf booth! Can you see the top of Hubby's head in there? He actually found a used club he's been wanting. He tried it out in the afternoon and loves it (and it was less than $10). 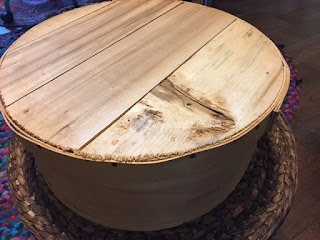 I've been on the hunt for some round things - 3 of them - to set on top of those green cylinder bins I bought a few weeks ago. I needed something sturdy to act a lid to put things on. I found these cheese boxes. And I thought their lids would work. So we bought three boxes - they were only $7.20 each. 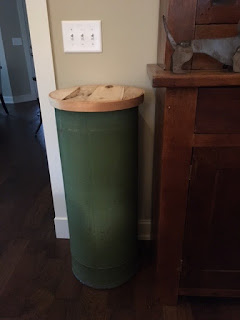 They are a PERFECT fit! Yay! I plan to sand them and maybe seal them with wax. So excited about these! So now I have the boxes themselves left over - I only wanted the lids. Not sure what I'll do with them... They would be cute mounted on a wall to store yarn...we'll see.

I sponge painted the LAST piece of fabric for my Alabama Chanin top - yay! So today I can finally clean off the dining room table. I plan on a quiet day - hope to stitch some hexies. And maybe a hike later? And a visit with a friend for a bit. Love a lazy Sunday!

But first a cup of coffee. I've gotten back on coffee lately, though a few mornings a week I still have my tea instead. I think we'll skip swimming today. On weekends there are more likely to be families staying at the hotel and using the pool.

Rodan and Fields
I received my products Friday! Officially started my own facial regimen last night. (And I started Hubby on a regimen, also - these products are for men, too!) So first we took 'before' photos. I look like a mass murderer in mine! Haha! In one month I'll post the before and after photos and we'll see how we're improving. I'm picking up some samples later today for those who asked for them. And I'll have more samples coming in soon.

Go forth and hexie!