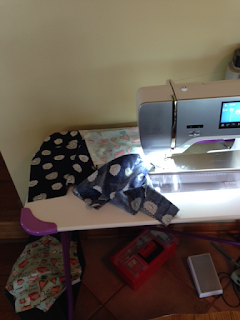 So good to be working with my BERNINA again! Yesterday I was rocking and rolling: I was 'assembly line' piecing several identical quilts at one time and I got so much done! More about these quilts later, I promise.

I also vacuumed, did dishes, and trimmed the quilt that I had just bound. I love a productive day! Oh, and I made a garbage run. We don't have garbage pick up here at the lake house. But there are dumpsters we can use at the local fire station which is just down the road. We typically run down there in a golf cart, but I took the car yesterday.

This morning we're watching Tiny House Hunting - before we drive to Auburn to look at houses. Does that give you a hint? It's crazy! We had planned to build a home in our old neighborhood. The plans had been drawn for us. We'd met with the builder. BUT...

Now we're thinking differently. After living in this tiny lake house for a couple of weeks, we realize that we just don't need so much space. Especially since the lake house will be in the family for us to use whenever. AND SO, we're looking at much smaller homes now. Maybe we will even find one existing without having to build. #goingtiny
Posted by Julia Wood at 4:43 AM