Back to a UFO... and some publishing news... 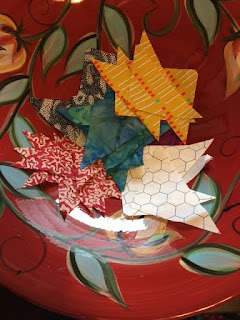 I got a few things done yesterday that had been on my list. I cut some quarter square triangles to have at the ready to make Bonnie Hunter's hourglass quilt leader/ender project. Haven't sewn a stitch yet, but at least I have some pieces ready to go.

I have this pretty bowl and haven't found a place to put it. So I put the triangles in the bowl and set it on my desk. Yay! 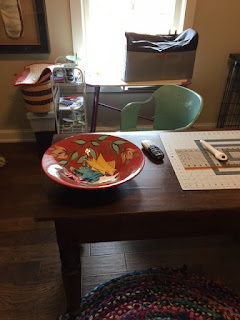 I decided that my next UFO would be my Lollypop Trees appliqué quilt. I found the blocks that I have completed - all four of them. And I found the block that was in progress. Not much to do on it! This quilt has 16 blocks so I do have a long way to go. But it feels good to pull it out again. 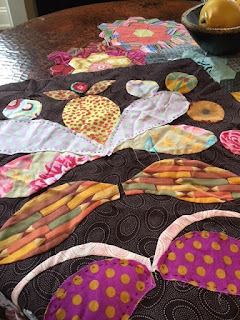 And the big news from yesterday: AQS is no longer going to publish books! WOW! This came out of the blue! As an AQS author, I received the news in an email yesterday. But I can't say that I am that surprised.

I will always be grateful to AQS for publishing my three books. I decided to use AQS because of the fact that they have been the only quilt book publisher that also puts on many large quilt shows and I thought I've have an "in" to teach in them.

Unfortunately that did not turn out to be the case. Three books over more than 10 years and I've only been invited to teach at two AQS shows. I heard from friends who were NOT AQS authors who were called on to teach at AQS shows without even applying. Hmmm.

I have often thought that AQS was not keeping up with the times in terms of social media. Other quilting publishers have active blogs that feature their authors. Social media (blogs, Facebook, Instagram, etc) are the way of the world now and publishers who stay current in these media are obviously doing themselves a favor.

When I signed my first contract with AQS, it had wording which stated that in the future any other books I wrote must be done through AQS. At the time I was so excited to be getting a book published that I didn't worry about that. But it forced me into a longterm relationship. Short of hiring an attorney, I couldn't publish a quilt book with another publisher. And so, I have to admit I'm relieved now that if I do write another book (and I just might!) I can contact another publisher to access their interest.

And that is enough said about that!

I need to get going this morning. It's grocery store day! Hope you have a lovely day!
Posted by Julia Wood at 7:17 AM