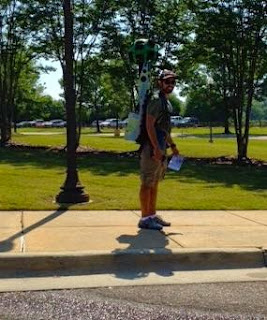 Have you ever seen the Google Maps car driving around your area. I've spotted it a couple of times, including while I was in Cleveland filming for QATV. Yesterday as I drove to my OB/GYN appointment, I saw the car parked on campus. (My doctor is on campus, at the University Health Center).

Then as I pulled into the clinic parking lot, I saw this guy! I know it's not the best photo. but that's the Google Map camera over his head. (Click on the photo to make it bigger.) He was walking campus to get photos. He was very nice and stopped to pose. This was a first for me! My younger daughter saw him later in the day on the opposite side of campus.

Yesterday was a whirlwind and I never picked up a needle and thread, though I did get some computer work done. Today sewing WILL HAPPEN!!!

And now for some Hexie Love news---
When a new issue comes out, I always send a free link to anyone who contributed, namely Mary Kerr for the latest issue. Apparently I was not careful when I sent her the issue - I accidentally selected EVERYONE who has previously bought an issue - so, many of you are sending me e-mails thanking me for the free issue. You're welcome. My bad, but your good fortune! I not going to attempt to take it back; I'm just chalking it up to my learning curve. I hope you all love the issue and consider it a gift for your support.

Speaking of which, isn't it a GREAT issue!!! I'm getting fantastic feedback from many of you!!!!
Posted by Julia Wood at 7:16 AM