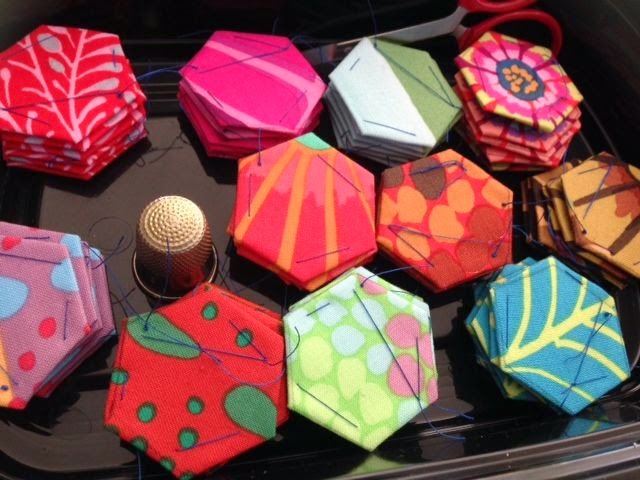 I basted LOTS of hexies while watching football yesterday - each of these stacks has 6 hexies in it. Lots of fussy cutting here! I love basting piles of hexies for later use. I already had a nice amount of 1" hexies basted and now my 3/4" hexie stash is growing.

Today I've spent some time organizing my sewing stuff. We have 3 bedrooms upstairs and one of them is my studio. The other two are for guests, BUT my sewing stuff has flowed over into both guest rooms. One of the beds was even covered with stuff. We also have an office upstairs with 2 long built-in desks - wouldn't that have been nice to have when our girls were growing up?! Of course I'd piled these horizontal surfaces up with sewing stuff, too.

In about an hour and a half I made a big dent in the mess. The piled up bed is now cleared. The desks are now cleared. I'm making one desk the Hexie Love hub. I have several bins here with items I'm planning for future issues. I have my featherweight set up on the other desk. I'm not finished, but it looks so much better up there!

I've also made smoked turkey soup today. It's loaded with turkey, barley, onions, carrots, potatoes, and cabbage, and lots of herbs. Smells wonderful! Once it cools I'm going to freeze most of it for later this winter.

Hubby and I are planning a long walk this afternoon - it's turned into a warm day here. And I have a little magazine project to work on…