Why My Thimble is Dented.. 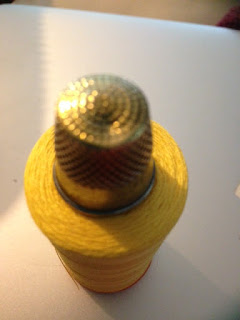 Cooper. He's been at it again. He's mad at me and this is how he gets his revenge. And why is he mad?

But the worst of the worst....he steals from the kitchen garbage. The garbage can is built into the cabinets - it's like a pull out door. And Cooper learned quickly how to use his nose to open the cabinet so he can "shop" in the garbage. And it's gotten worse lately.

Saturday he went shopping in the garbage and came out with the previous day's coffee filter. Yes, coffee grounds all over the floor. That was the final straw. 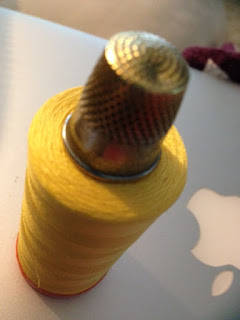 Hubby and I went off to Home Depot and bought a nice magnetic clasp and installed it. No more stealing from the garbage! He's so frustrated!

And so...now he's stealing from my side table. Yup. He stole my thimble yesterday afternoon from the table and put this huge dent in it. (Glad he didn't swallow it.) Yes, it's my favorite thimble...the perfect thimble. 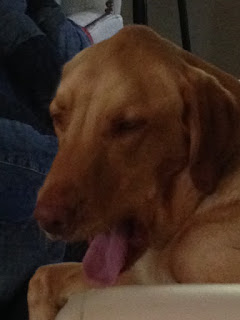 He did apologize, though he doesn't look very sincere, does he?

Back to work now. I have hexies to make! And hexies to appliqué!
Posted by Julia Wood at 5:10 AM