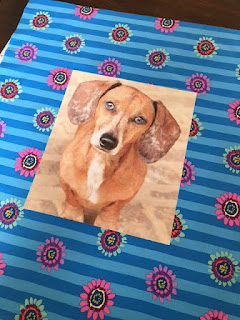 Yes, I'm a bit late posting today. I was supposed to go on a day trip with friends, but I ended up canceling because Hubby had to be away and it was just too long to leave the doggies in their crates...especially on National Dog Day. :)

So what did I do instead? Well, of course there's a story behind it. And YES, I started another project! EEK!

I signed up for a class in Houston this fall - I typically don't take classes when I go to Houston, but this was one I was REALLY interested in taking. Thread Painting with Pam Holland. So I registered as early as I could....and found out the class was already full. DARN!

Then I realized that Craftsy has a Thread Painting class by Pam Holland! BOOM! $30 later and the click of a button and I got it! So it's been sitting dormant in my computer feed from Craftsy for weeks. I figure what better way to spend the day than to watch some of the class.

I'm watching a bit, then doing what she taught in that lesson...then watching more, and doing that. Step by step....just as if I were in her class.

So today I selected a picture (Mickey) and printed it on fabric. I selected a background fabric with care. I wanted something blue since Mickey's eyes are blue. And Mickey, though a male dog, is rather dainty and effeminate. So I picked something with flowers. I have the picture on fabric attached to the background. 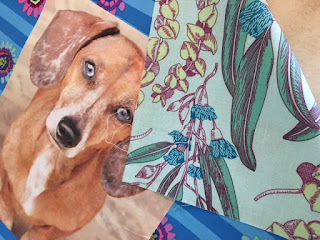 Next I picked out a backing fabric...another floral.

And so now I need to pick up some batting (tomorrow) and I'll be ready to stitch.

Since I made hexies yesterday, I didn't feel guilty for doing something different today.
Posted by Julia Wood at 3:14 PM