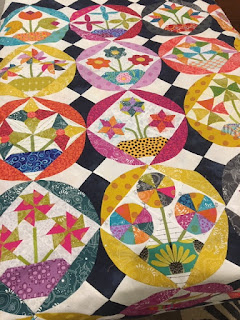 When we moved to the lake house in August, I brought plenty of sewing supplies. I have my Bernina and some assorted fat quarters. I brought a few WIP's also. One of these was Bring Me Flowers (by Jen Kingwell). I had not worked on this quilt for over a year (because of breast cancer). The flower blocks were all complete and I had the alternate blocks prepped for appliquéing the arc pieces. You can read about my starting of the quilt HERE. Yes, that was almost THREE years ago!

I have found in the last year that my arms and shoulders are weak after 3 surgeries. Hand sewing has been easier for me than machine sewing. So a few months ago I pulled out the alternate blocks and worked on them. I realized a couple of weeks ago that I was one with these. Yay!

At this point I needed to cut setting triangles for the outside edges. So where was my rotary cutter??? I hadn't seen it since before Thanksgiving. I remember putting away all my sewing stuff living in the kitchen/dining area. I looked for two days before giving up. I ordered a new one from Amazon. All this delayed my progress for about a week.

Once I got the new rotary cutter, I cut the triangles and began sewing the blocks together.  But I wasn't done yet. There is a pieced border on the four sides. I cut these pieces. I should have been done  with the top by now, but life keeps getting in the way. Finally yesterday I made one border and have it pinned in place. I'm hoping I can get a least two borders stitched in place today.

I have bought the backing and batting. I plan to machine quilt in the ditch and add some big stitch quilting. Hopefully I'll have a finished top to share SOON! I will say that I have had more fun making this quilt! It's a fun one!

1. I started physical therapy this week. I have a bit of cording under one arm - a common occurrence of scar tissue after breast surgery. Plus my left arm and shoulder (cancer side) have a very limited range of motion. This is why I can't machine sew for very long at a time. I can tell the therapy is already helping.

2. We are expecting dangerous storms here tomorrow afternoon. Hubby has been busy moving outdoor stuff (bicycles, furniture, plant pots) under the house. He's using bungee cords to tie some things down. He has also fixed us a 'safe place' to retreat during the storm in our crawl space. It's a pretty tall area, so he has set up a couple of chairs under there and has our bicycle helmets ready for us to use. We take weather threats very seriously.

3. Hubby and I have been doing Whole30 during the month of January. He is totally on board with me - it's much easier when we are both eating the same foods. I can already tell that my energy level has increased - I love the way I feel when on Whole30!